Anmar Mirza, based in Norwich, UK, is an emerging artist who focuses on many aspects of design. Using a variety of media to produce murals, paintings, sketches and clothing, Anmar has worked on both commissioned and independently financed works around the world. His most impressive project to date is a commissioned mural for Bar Tapas and Thorns in Norwich, where he braved three floors of scaffolding to create a complex and dramatic 15m x 10m mural on the side of a building.

Anmar's work varies, but his signature style shines through in every project. Visibly inspired by Basquiat, Bacon and Picasso, he incorporates emotional stories into his complex designs. Middle Eastern and Asian art forms are clearly a source of inspiration, and the fusion of these styles with those of Martinez, Klimt, Keith Haring, Hockney and Van Gogh have created an impressive combination that he can now call his own.

One should never forget, however, that Anmar is firmly rooted in street art and graffiti. Plotting his own creative path under the cover of darkness with a spray can and a wire cutter is what really excites him in his work.
In the future, Mirza hopes to travel more to meet new people, paint in new places and have exciting experiences. His spontaneous attitude and willingness to try new things make him a pleasure to work with at home and abroad. You can also find his work in Switzerland, Spain, Italy and even Morocco, where he has collaborated with local artists and guides to find places to paint. 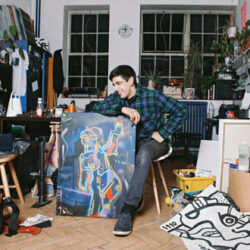