My style is a mix of "little bit from everything"

Artez is a Serbian artist whose style is described as a mix of photorealism and illustration. Inspiration for his works comes, apart from the location, from the things and people present in his daily life. He usually takes a photograph of something that inspires him as a starting point, but during the painting process he improvises a lot, mostly because he likes to draw inspiration from the location itself. For years he was looking for the best way to express himself and to transfer ideas from his head to the flat surface - the wall. Gradually, he has worked with 2D and 3D characters, different kinds and styles of characters, photorealism, and finally he has stuck to the mix of "a little bit of everything". 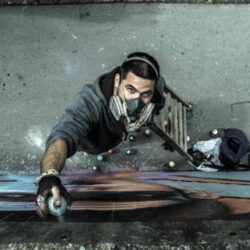