Through the eyes of Digo Diego, you get a specific view of society. His artworks are not only meant to call a halt to bare walls and empty spaces, but also to awaken an emotion in you, something to which you react like: 'a ha, indeed'.

Our society consists mainly of urban constructions. Housing in concentrated areas with schools and shops, with characteristic in and out traffic to 'offices' and 'construction sites'. This structures a social organisation and manifests itself in a relational system where common sense has almost disappeared. In the artist's home region (Madrid, Spain), places are often abandoned or unused. He has been looking for a way to reimagine them by creating a work that not only reflects the area, but also evokes an emotion that makes people stop and reflect on their daily habits and routines.
This redefines the area and in turn the social aspect, which is the most important thing for people to return to that area. Diego reverses the purpose of public space with urban art, creating a form of collective learning.

This framework gives context to his work of art. The artistic intervention becomes the central axis, sometimes acting as a means of social education for the citizens, sometimes as a means of personal development. In one way or another, they are connected to the citizens, the artist, the collective spirit, the environment, the area and the city. His work is a process of communicating with the people to say what is 'fixed' (buildings) and builds its critique on that by denouncing or positively intervening the relationship of being with itself, between ourselves and the environment.

Long story short: a frequently appearing character called Black (Nero), many colourful geometric components, and a story behind every mural or piece of art, linked to its surroundings. An easy-going approach and style with a deeper meaning. 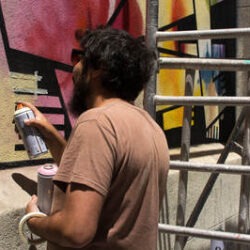