Doa oa is a Spanish artist from a small village called Sober. In recent years, she has been working on a reforestation project (Reforestando): murals and artworks that bring the neighbourhood back to life just like nature does.

"We transform public space by intervening in the presumed reality of perspective perception. This idea proposes a symbolic rebirth and the consciousness surrounding it. There is an urgent need to equally respect and value the natural environment, the importance of being aware of everything that is part of it, including native species and its inhabitants."

Her murals remind us of the true nature and meaning of what surrounds us.
The plants Doa paints are often found in the environment where her projects take place, or refer to that specific location in some way. From delicate Ficus leaves falling among tiny pink cherry blossoms, to highly organic pieces composed of leaves and roots coming to life. After the artist has finished with a building, they seem to radiate existence from within, creating a strange but captivating force for the viewer.
A good example for the meaning behind the reforestation project can be seen in one of her projects where she painted blackberries and wild strawberries on the facade of a shop/warehouse. These fruits usually occur in late spring and summer, and the structure on which they are painted only opens up during the warm season when they are in full bloom. 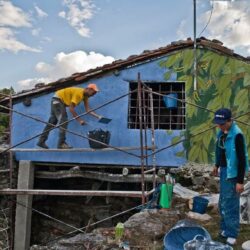