Tanini is an Albanian artist, poet, green activist, journalist and essayist. He studied painting at the Lyceum "Jordan Misja", and graduated in Philosophy and Sociology at the University of Tirana.
He is a man who loves nature, trees and the colour yellow. For this reason he also loves cycling. As the artist describes, "I come from everywhere and I was born in a year of numbers". Every now and then, he donates blood, as a sign of delivering life particles to people in need.

After a stint as a journalist for various radio and television stations, he now moves around as a freelancer, writing for a handful of newspapers and magazines. He is also active on social media and runs his own blog "Letra nga Republika e Shkarravinave" (Letters from the Republic of Scribbles). In addition, he is committed to nature conservation and, together with his friends, has launched the "Plant your own tree" initiative. In less than two years, more than 11,000 trees have been planted throughout Albania!

It almost seems as if making art is a hobby for this artist, but this is not true. He spends most of his days negotiating with local authorities to bring more colour to the streetscape. From painting small interventions with local artists to wrapping giant buildings and structures in a layer of paint, he is constantly 'creating' and working on the evolution of his personal style. 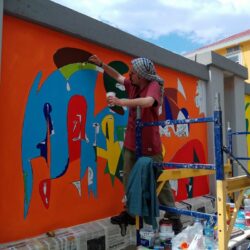