Feoflip is the alter ego of Fran Feo, a boy born in the Canary Islands, far away from the facilities and support of urban art. His story began around the year 2000, when street art was not yet receiving artistic recognition. He moved around at night to create his pieces. After some time, the crew 'Chinijos del Millo' was born, which consisted of artists working in different disciplines. This crew engaged in 'artivism', street theatre, performance, social actions and graffiti.
Between 2005 and 2011, Feoflip stayed in Barcelona, Galicia and Thessaloniki. This caused a split in the group, giving him more space to take his personal career seriously. During that period, he worked with the squatting movement: he painted murals, organised workshops, made screen prints, stencils, banners, designed advertisements and similar artistic actions. Those years caused a change in consciousness that would be reflected in the message of his work. On the other hand, Fran Feo focuses on illustration, puppetry, comics and stop motion.

To this day, Feoflip travels the world to see and feel all the effects and beauty that Mother Nature has to offer us. As an urban artist, he applies his art to various indoor and outdoor locations, environmental projects and street & urban art festivals. Abstract yet alive and surreal, his art is a combination of all the elements he has picked up during his years of travelling and working with others. Bio-mechanical animals, surreal humanoid robots doing yard work, and other strange cartoonish characters have appeared on many walls around his home base (Tenerife, Canary Islands) and far beyond. In his own words: a unique and original universe.
Coming from a city with history, Feoflip has the habit of always leaving a strong message in his works. His allegories contain emotions and nonsense that reflect a dehumanised society due to technological changes. 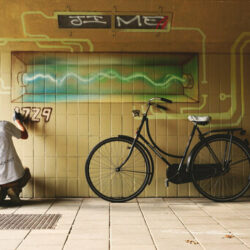