Gola Hundun took his first steps in the art world with traditional graffiti lettering at the age of 12. He soon distanced himself from public work and concentrated solely on painting and drawing at home until he was 21, while studying at the Liceo Artistico in Ravenna and the Academy of Fine Arts in Bologna. In 2003, he moved to Barcelona and saw that the "DIY style" was alive and kicking in the streets. After seeing this active street art community, he decided to bring his work back to the public space. In addition to his painting adventures, he makes sculptures that incorporate fibres, plant life, electronics and live performance. His sculptural work often interweaves with public installations and paintings.

Gola feels ideologically closer to the animal sphere than to the human one. He is interested in showing different aspects of the relationship between humans and the rest of the biosphere, exploring themes such as cooperation versus domination, genetic industry, shamanism, vegetarianism and spirituality.
His influences come from cartoons & video games, post-human culture and psychedelic art. Even now, his many travels around the world have played a major role in changing his perception and style. 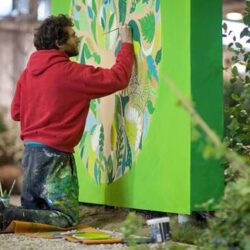