Urban artist Golif grew up in Tyrol (Austria) and gained numerous experiences in different professions at an early age. His many years of experience, both in the country and abroad, certainly shine through in his creative work.

He worked as a gilding artist, sign painter, illusionist and painter. Crucial elements of his contrasting pieces are vivid dynamic brushstrokes painted - for the most part - with Tusche (a black liquid used in lithography) on various substrates and surfaces. In 2016, he graduated from the University of Applied Arts in Vienna to pursue a successful career in street art. Golif has organised several solo shows, and just loves to create murals on an immense scale. Most of his work is constructed with faces that show the everyday expressions we have as humans. A car park that takes up some 28 000 square metres (visible from space), or concrete silos... nothing is too big to tackle. 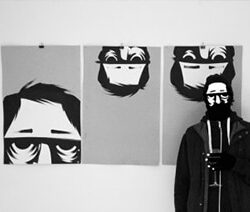