For some 30 years, GOMAD has been painting all over the world and taking part in countless projects. A long history of murals, street and graffiti art, canvas and workshops would almost crown him the Aerosol King of the Low Countries, but he prefers to remain modest.

Starting out as a graphic designer in his youth, he soon moved on to become an art director and worked for a handful of sign and advertising agencies. This enabled him to create the basis for the artwork he creates today. His photorealistic style is often combined with abstract graphic forms and colourful surfaces.

Unlike most artists, he is never too shy to practice his craft in any style or genre, but when given the chance he will create his own freestyle work. This usually consists of intense eyes, hands and faces in a very surreal and mind-blowing arrangement. This 'GOMAD' style is combined with cubist forms in a kind of Picasso-like composition, better known as 'post neo-cubism'.

In recent years, GOMAD has been working with many other artists on the scene, which has strengthened his position and given him breathing space. His designs that are now popping up everywhere are the fruits of this. They show the world that he is not only good at what he does, but also in collaboration with others can produce stunning results with very different outcomes. Since 2015, his works can be found in street art and contemporary art galleries throughout Western Europe. 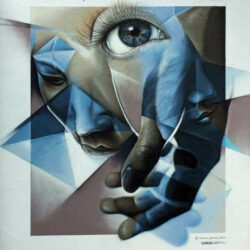