IVES is an Amsterdam-based Street Artist, who started doing graffiti in 1996. Since 2005 he has been known for his combination of freehand and stencil techniques. His work can be seen in the streets of various cities around the world, such as Amsterdam, Basel, Brussels, London, Berlin and Miami.

IVES collaborates with the GO Gallery in Amsterdam, Saatchi Gallery in London, City of talents in Toulouse and Adjust Gallery in Miami to showcase his artworks.
He is also a Concept Designer and does Freelance work for companies such as Grolsch, MINI, Rockstar, KPN/HI, Nike and Xs4all. He also founded the Amsterdam Street Art foundation. 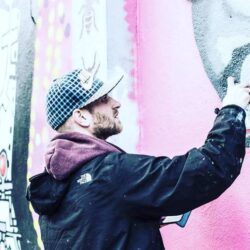