Michaël Husser, better known under the pseudonym MIKA, is a street artist from the east of France. Since childhood, he could not resist the urge to draw. This eventually led to a career in graphic design and illustration, which in turn evolved into something bigger: drawing and painting on walls. The step to creating murals therefore came as no surprise. MIKA has been BMXing on flatland since he was 16, a scene that inspired a wide range of the street art we know today.

As his jobs do not make him dependent on a location, he spent 4 years in New Caledonia. Here he had plenty of opportunity and freedom to create murals and experiment with his own style. His travels after this period developed his openness and adaptability to almost any project.
The artist interprets his personal work as a certain reality on a background of poetry, with portraits of large size with characters illustrated in a disproportionate way. They are constructed like a painting, with crucial lines as in a sketchbook.
Finally, he moved back to France (Bordeaux). There he tries to maintain the dynamics of his 'research sketches' by adding material in such a way that his paintings and sketches feed off each other. It is a way of working that we often see with illustrators or graphic designers who take the step to mural painting. Naturally, with a different result every time. 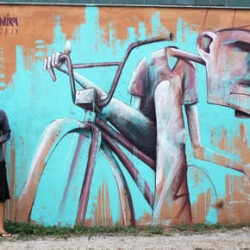