Mauro 'Muretz' is an artist from Sao Paolo (Brazil) who is best known for his street art work. He started working as a freelancer in the arts at the age of 16, after being expelled from school and having to make a living out of the reason they expelled him: drawing.
Around 18, the young Muretz enrolled in university under pressure from friends and family, but shortly afterwards became frustrated and dropped out. He later left his country for London, where he could more easily earn a living from his passion. After that time and a new attempt at college, Muretz returned to his hometown and began painting in the streets. His works have since been featured in graffiti and street art publications, even TV shows, magazines, newspapers and articles around the world.

Muretz uses simple strokes and solid colours to portray his comic characters, sometimes in uncomfortable situations, but always in a thoughtful and inspiring way. His style is a great contrast to the standard graffiti common in the local scene: instead of screaming complexity and colours, or repetitive and aggressive graffiti tags, the focus is on the content and ideas he wants to convey with his piece, while always keeping the form simple and clean. The result is a unique and fun style, inspired by playful and imaginative ideas. 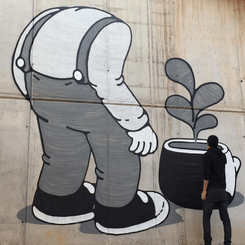