Ox-Alien is a Dutch artist who started tagging his name on everything he came across in the late eighties, especially on locations along train tracks and hard to reach places. Around the year 2000 he made the switch to real street art.
During this 'era' it was commonplace to create angry figures, develop your own style and show the world what you were made of. Instead of wild-styling and tagging, he created a pink flying head with one eye like an "O" and one eye like an "X". Some people on the street called it "Ox-Alien" and it soon became the artist's pseudonym. Not much later he became part of the 'Lastplak Collective', which won the audience award of the very first Dutch Street Art prizes.

Lastplak is a group of eleven painters with different backgrounds and diverse skills. Their goal is to paint, regardless of surface, size or location. Most of their work can be found in their home base, Rotterdam, but they have also travelled extensively and created beautiful works abroad. In the portfolio below you can see Ox-Alien's works which are often collaborations with Edo Rath, KBTR, Doodkonijn and many others from the Lastplak collective and their friends...

Ox-Alien has also participated in several mural projects in Thailand, France and Greece. Lately, he has been painting more on canvas and participating in exhibitions and shows. 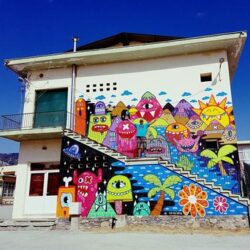