Piet or Pierre Rodriguez is a self-taught painter from France, currently living in Brussels. From a young age, he enjoyed playing with pencils, but it was only in 2012 that he discovered his passion for painting.
After studying hotel catering, he turned to the world of advertising. The creative aspect of the job piqued his interest and allowed him to work with people who were active in the same sector. He came into contact with the hosts of a small painting exhibition and could not resist the urge to experiment on a canvas himself.

From there, he embarked on a journey of creating realistic portraits and compositions between surrealism, symbolism and graphic deconstruction. His works are mainly black and white, with light becoming the key and focus that brings out the soul of his painted subject. In late 2015, he discovered the wonderful world of spray painting and street art through the Propaganza collective. This allowed him to experiment with a new technique on a new medium. 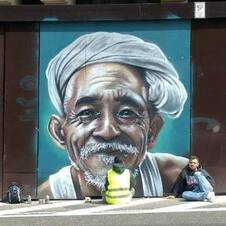