Psoman is a street artist like no other. With his distinctive and recognisable cell-shading style, he has made his mark within the European borders and in many Asian countries. The latter has made a big impression, because you often see an influence of certain Asian styles seeping through.
He sprays his way through murals, festivals and events, occasionally accompanied by an exhibition. As a painter and graffiti artist, he also creates works of art on canvas and paper, the subjects of which are mainly animals with sometimes the strangest expressions on their faces, or who carry immense cities on their backs. 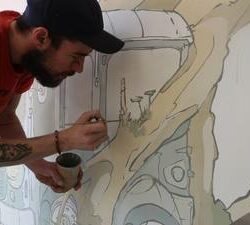