Spear is a Belgian painter, based in Brussels, and has been painting since 2002. With art as a way of creating a social and humanistic message, his work is split between indoor and outdoor activities. Travelling half the year, he painted in a number of Latin American countries such as Argentina, Brazil, Chile, Colombia, Ecuador, Peru, Bolivia, Costa Rica, Belize, Mexico, Cuba... and European cities such as Paris, Berlin, London and, of course, Brussels. Travelling made him aware of different social realities where he discovered a different way of thinking and living, but it also made him question our lifestyle and values.

His outdoor interventions are vital for this artist who uses it as an icebreaker with the local population: "When I travel, painting gives me the opportunity to be more than just a tourist. It creates a special relationship with the locals. From here begins an exchange in which I not only take from them, but also give something back. We are at the same time teacher and student of each other, because everyone has something to learn from everyone else. All the lessons I learn on the road are the inspiration for my work and my life".

The placing of portraits on a large scale is his way of re-humanising our cities, and of reminding one how important it is to stay in touch with other's feelings and emotions, in a society that tends to lose human values. The human figure has become a product and is only used as a tool for promotion, an empty shell.

Spear is fascinated by old masters, their techniques and the incredible power of narrative in their paintings. But he is also very inspired by contemporary artists such as Michael Borremans, Alex Kanevsky or Connor Harrington. His work is a slow transition from an academic education to a more contemporary performance, moving from a controlled realism to a more spontaneous and deconstructed painting.

Committed and convinced that we can all do something to change the world we live in, Spear launched the "Painted for Them" project in 2012. The aim of this charity project is to help people in need and break down prejudices. It is based on three pillars: human exchange, artistic creation and the intention to change attitudes. This project represents a part of his production. His last show "Invisibles" presented the stories of twenty homeless people he met on the street. The proceeds of the show were donated to associations working to improve the situation of the homeless in Brussels. Most of his models painted in the street are also homeless, a poetic way to make the Invisibles visible again... 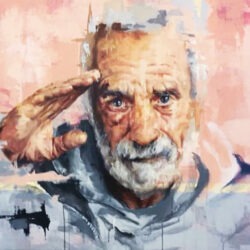