As an illustration student in the 1990s, Spogo set up a studio with two classmates. They began an extensive exploration of techniques, experimenting with the use of figurative art and contemporary languages. His first paintings are related to popular culture, urban landscape and the nature of his city, Badalona.

In 2006, he discovered the world of street art, which marks the style of his future works. By making collective and solo murals, he created a style of graphic synthesis drawings, mixed with intuitive compositions. Lines overlap and are mixed together, increasing the volume of the composition in a controlled way. Many experiments with different materials, techniques and stencils, drastically improved his skill.

These years were followed by many collaborations, during which he often found these murals in abandoned factories and around his home town. The creation of organic forms to represent his personal evocations of nature and food, combined with the use of geometric shapes and patterns on decorative elements, clearly show that his work is 'written' in a personal and abstract language. His long-term goal is to merge paintings with architecture. An aesthetic result with balanced forms and colours that respect the buildings and their surroundings. Similar to his most recent work. 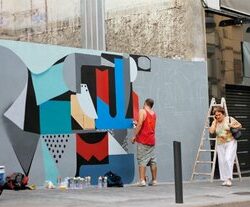