Tellas (Cagliari, Sardinia, 1985) studied in Bologna at the Academy of Fine Arts. Growing up in the rugged land of Sardinia, he learned to investigate the non-urban aesthetic. This results in works with a personal and intimate vision of the elements of natural landscapes. That meditation process that combines space and form characterises his work. That is why his works can be seen as studies, executed on a wide range of walls, canvas, installations or even a piece of paper. He explores the complex combination of form and space and investigates the pristine landscapes from which he derives individual motifs.

Tellas' works are often executed in different shades of a single colour. His delicate line works, inspired by nature, go into great detail to depict the chosen motifs. He repeats these details endlessly to fill the surfaces on which he works. Tellas is one of the few street artists who does not strive to convey strong political messages, but rather creates the remarkable, meditative works of art that make the viewer feel good.

The Huffington Post named him one of the 25 most interesting street artists worldwide. Tellas develops his art in various fields: drawing, painting, installations, printing techniques and even audio-video productions. The artist has also been featured in numerous art guides, magazines and publications.

Besides a large and seemingly infinite number of murals in his portfolio (for example, his public murals and installations that were included in the documentary "A Grande terra do Sertão" during a one-month art residency in Brazil together with Roberto Ciredz), his participation in shows, festivals and exhibitions embraces a large part of his career in art. From Australia to Russia, across Latin America, he presents his artworks with the most interesting subjects that in one way or another all have to do with his younger self, who grew up in Sardinia. 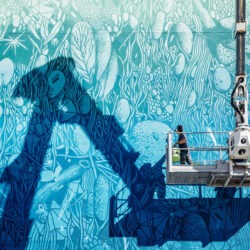