Utility boxes are often an eyesore. Ugly, dirty, or vandalised by taggers, you've probably seen them. Together with local and professional artists, we are going to give these monotonous and grey electricity boxes a nice layer of art!
Treepack is responsible for the coordination and provides support and an instructive path for the participants in your town or city. Everyone with a talent for creativity is welcome! Age is not an issue. We have already worked with pupils from primary school to university students, local amateur artists, professional artists, and many others!

The result: more colour in your street, less vandalism and extremely enthusiastic participants and residents!

The city is committed to sustainability, renewable energy and a green future. That is why the theme of this Tour Elentrik was 'Sustainable Development Goals (SDGs)'. Together, we go for a better and more beautiful world!

21 utility boxes in the Wilrijk districts of Oostverveld and Elsdonk were given a colourful makeover by various street artists. Legendary folk singer Ferre Grignard was also honoured there. Next one, please!

In Zele, ten dull, grey electricity boxes have been transformed into colourful gems. Each of the boxes tells a unique story on the theme of 'oxygen'. A very broad theme in which the local artists could fully use their own imagination.

The electricity boxes in Beringen and its suburbs were given a makeover on the theme of street names. In this way, they made the link with the local history and strengthened the community feeling in the neighbourhood!

In front of Merel's house stood a dull, grey utility box. She made a drawing asking us to upgrade these ugly objects with art. She herself helped with the design and implementation. This time, the artists worked on the theme of animals and each time they gave it a nice personal touch.

As part of the Diversity theme, we took 10 artists to Luchtbal in Antwerp to brighten up the electricity boxes. More colour on the street, more happy people. On to the next one!

For the project 'Oxygen for the Senne', a gigantic restructuring project of the Senne valley in Halle, Lembeek, Buizingen and beyond, we had an aperitif with Tuzq. He created two works of art on a gas and electricity box in the context of the local flora and fauna in Halle. Oxygen for the Senne is not only about street art, but also about architectural renewal and land art. Many old and well-known natural environments are being 're-excavated', restored and adapted to the new master plan. With a lick of paint, of course ;-).

Dull, grey, an eyesore... The electricity boxes in our streets don't really appeal to the imagination. That is what you thought!
In Haacht, as part of the Animal theme, we transformed a dozen of these boxes into a creative, colourful spectacle in collaboration with local artists!

From now on, visitors and admirers can take a stroll along all these art objects in Terbank Heverlee via the Tour Elentrik!
On the theme of animals, the residents of Alvinnenberg asbl, the local residents of Terbank and our professional artists were able to paint 20 utility boxes together.

In the theme NATURALLY FIERCE we went to Lokeren to make these electricity boxes more beautiful. Thank you, next!

In the Street Names theme, we gave the electricity boxes in Maasmechelen a great makeover.
With Spongebob on the street, it's always party time, isn't it?

BREATHE IN THE SEA. Under this motto, we went to Middelkerke to transform the electricity boxes into colourful gems for residents and visitors alike.

Who says Nieuwpoort, says fishing. With that theme we pimped the grey boxes with 7 Treepack artists. On to the next one!

During this Tour Elentrik in Diest, the residents provided all the input. From designs to full implementation. Magnificent, isn't it?

The Herbert Hoover Square in Leuven was given extra colour by Treepack! With the theme 4 SEASONS, our artists created these beautiful designs. On to the next one!

Diversity & heritage, two important themes in Maasmechelen. That is why we gave colour here around the utility boxes. Peace!

This beautiful work can be found in the Pieter Nollekensstraat in Leuven. We are big fans!

In the theme of nature and roses (typical for the region), we went out with Tuzq in Sint-Pieters-Leeuw to make this cabin more beautiful. Mission accomplished, next one please!

OXYGEN! is a participatory project in which Treepack, the House of Tolerance and My Leuven will upgrade the surroundings of the Brusselsestraat. With street art projects and murals, ugly walls, electricity substations and a tunnel will be refreshed with artworks in a fauna and flora theme.

Several local artists and professional artists from the Treepack family took over one of the busy streets and magically transformed a handful of electricity boxes into Nature-themed ones!

The participants of the Tour Elentrik in Diest were very diverse and ranged from 10 to 70 years old: pupils and students from primary and secondary schools, college students, local artists and professionals, and people with mental disabilities. The result: more colour in the streets, less vandalism and overjoyed participants!

THE FIRST ONE - LEUVEN

Tour Elentrik is born! This electricity box in Leuven was the first to receive a makeover by our Treepack artist. On to many more!

You don't have to get on a plane to go on an adventure. Our murals let you discover the most colourful and dynamic aspects.

There is nothing we cannot brighten up. A few colourful touches can make a world of difference. The world is our canvas, all we need now is you. Help us bring some colour into the world by contacting us today.

Make an appointment with our Tour Elentrik Coordinator:

The famous painted electricity boxes are now also finding their way to Rotselaar. The artists of Treepack and five external professional street artists went to work to 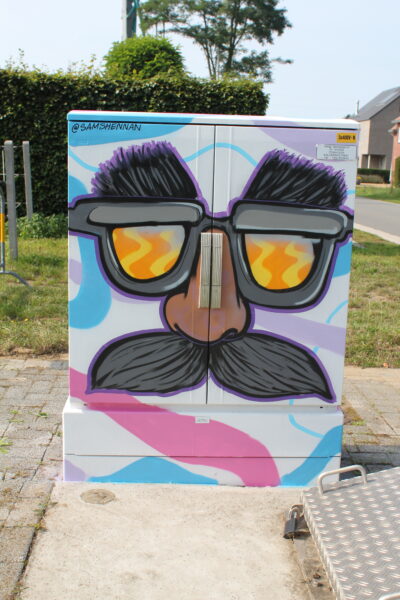 Art route with home-grown talent All works of art can be admired via a brand new seventeen-kilometer bicycle route that connects all the locations. Those who can follow the 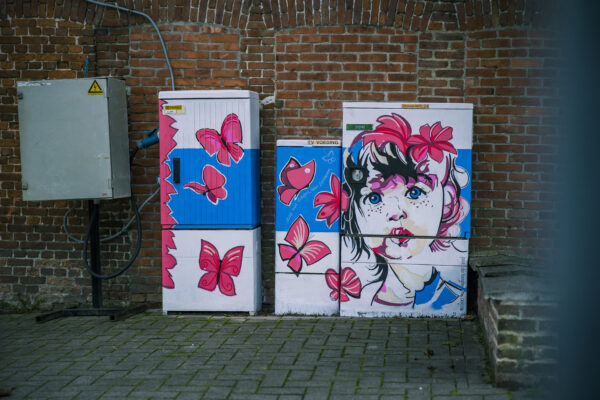 20 utility boxes transformed into street art works in the streets of Stekene! In September 2022, ten local creatives and ten professional artists embarked on the 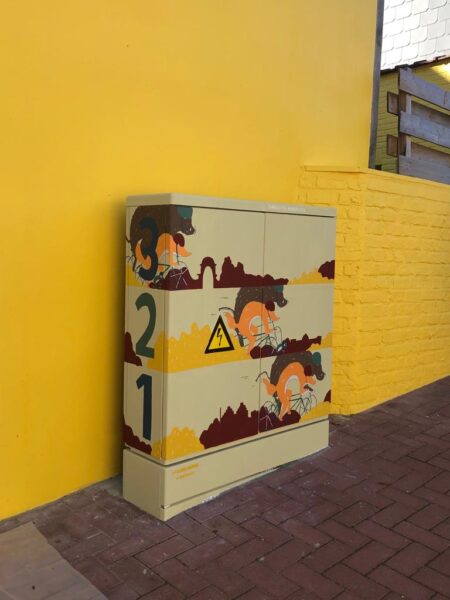 New works of art in Tervuren! Twelve electricity boxes in the center of Tervuren received a layer of street art. A group of artists from Tervuren went to work on this